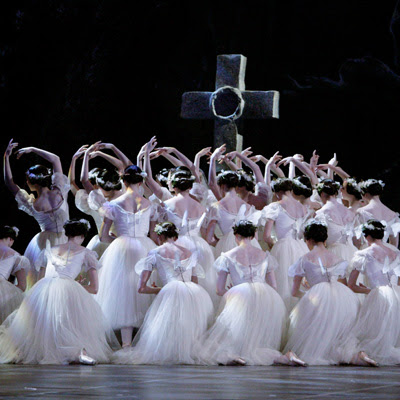 Theater - Ballet: Paris Opera Ballet's Giselle a sample story bi - line of how Paris and its Paris Opera section goes one International tours in the performance field of ballet.

The date of the performance was between July 5, 2012 - July 8, 2012
Making a rare international appearance--on their first American tour in more than a decade--Paris Opera Ballet returns to the Kennedy Center for the first time since 1993 with six performances of the beloved ballet Giselle, one of the great creations in the history of the Paris Opera Ballet. First performed in 1841, Giselle remains the quintessential romantic ballet, not only virtuoso, but also mysterious, gentle, and melancholy. Carlotta Grisi, who both inspired and created the role, was the first to bring her supernatural touch of lightness to the myth, carried away by Adolphe Adam's score. Choreographed for the Paris Opera Ballet by Jean Coralli and Jules Perrot, this same company, nearly two centuries later, performs it unlike any other.
Considered to be one of the world's finest ensembles, the ballet is run by the grande dame of French dance, Brigitte Lefèvre, who is herself a product of the Paris Opera Ballet School and a former member of the corps. The company's origins can be traced back to 1661 with the foundation of the Académie Royale de Danse and the Ballet de l'Opéra (1713) by King Louis XIV of France. Its repertoire is extensive, ranging from the major romantic and classical ballets to creations by contemporary choreographers.